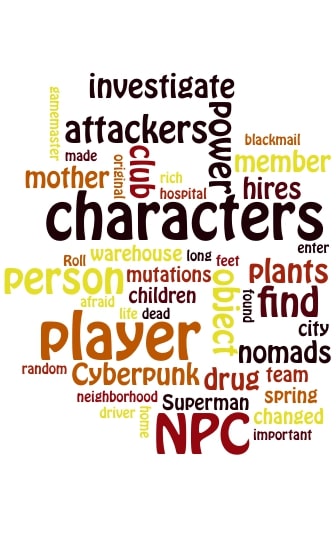 This list is heavily inspired by this German article (used with permission of the author of the article). It is mostly only a translation of the original text, but at some points I changed the translation for a better adaptation of the adventure seeds to the cyberpunk genre (e.g. Cyberpunk has no spirits).

Roll 4d6
4. On the beach several severed feet, also cybernetic feet are washed ashore within a few weeks. All feet are wearing socks and shoes. A serial killer? A shipwreck?

6. A vehicle or an object is stolen from a friend of the player characters or even from themselves. They need to find and recover it.

8. A village of nomads depends on a spring, but the spring is now dry. Why is the spring dry? Was it the earthquake that changed the layers of the earth, which now blocks the water from getting to the spring? Or does anybody “stole” the water? A corporation by using a well or pumps nearby?

10. A corporation has made huge land a restricted zone. It protects it by guards, sensors, automated weapon systems, drones, fences, etc. What does the corporation do on this land? A media wants to investigate or a NPC hires the player characters to retrieve an important object which he buried there.

11. The weather for a region has changed. It makes the life for the nomads much harder. They think the weather change is human made by a corporation. The corporation has a research lab and a factory in this area. The nomads sent some of them to investigate the matter, but the team has not come back. Today a nomad scout found the dead body of a member of the team. The member was murdered. Where is the rest of the team? Are they still alive or already dead?

12. A hospital where homeless can get a treatment for free is missing a volunteering doctor. Without this doctor the hospital can not work properly and has to end the treatments. Where is the missing doctor? Can a replacement be found quickly? Does anybody wants to shut down the hospital?

16. A wealthy and influential NPC wants to visit his mother like every week. A driver is ordered to bring the mother to the NPC by car. The driver tells the NPC that his mother was not at home. He has seen only some craftsmen renovating the apartment. An employee in the property management reported to the driver that the mother no longer lived here, but was now housed in a nursing home. The NPC is furious. His mother was sane and could take care of herself. He assigns the player characters to investigate and to free his mother from the nursing home.

17. The rich and powerful have a very exclusive club in the city. To enter the club you either need a personal invitation or and recommendation of a club member. Now some of the members of the club are blackmailed with secrets which are told in the club. A rich person and member of the club hires the player characters to find out discreetly, if there is a connection between the blackmailer and the club.

20. A new drug is in the city. It is called “Superman”. It is cheap. Besides all other effects of the drug one side effect of the drug are random mutations. These mutations are permanent and they can have positive and also negative effect on the person who took the drug. The exact effects of the mutations are up to the gamemaster Everytime the user uses Superman he gets a new random mutation in addition to any he already has. Also Superman is very addictive. Who wants to be like Superman? The confidence through the use of Superman leads to more dangerous actions of the drug user. The player characters hired to steal the formula of this drug.

21. An oil tanker has leaked off the coast. Several thousand tons of crude oil have already spilled and the oil spill has polluted large parts of the coast. Was it only a disaster or does somebody wanted exactly this? If so, why? The player characters are hired by a media to investigate.

23. The apartment of a successful entrepreneurs is broken into and vandalized. Everything valuable is stolen. The entrepreneur is badly beaten by the robbers and left naked in a bad neighborhood. A NPC asks the player characters investigate.

It quickly becomes clear that the victim was not attacked by accident. There are other cases with a similar modus operandi and the target has always been one of the rich and powerful. The clues point to a group of anarchists who want to send a clear message to the establishment. But why are they stealing everything valuable?

24. The player characters are hired to steal an object out of a museum. This object is the highlight of the museum. The object was stolen a very, very long time ago. Now a descendant of the true owner wants the object back. The museum does not give the object back. Is the employer of the player characters really a descendant of the true owner? Is the object in the museum really the original or only a copy?

Bonus:
This is more a setting.

There is a power outage in the city. All power plants that supply the city with energy are hacked and crashed. In addition to the attack every few minutes, dirty bombs explode in all the power plants. Hours after the attacks, repair teams from the municipal utilities are overwhelmed and eliminated by unknown attackers. If the player characters try to enter one of the power plants, masked attackers will try to take them by surprise from an ambush and incapacitate them. The attackers withdraw immediately after the crime.

In the next few days, food will run out and residents will either have to move away or have to find their way back to a more primitive way of life. There will be looting and rioting. Who is behind this terroristic attack? How do the player characters survive the next days? If the gamemaster wants to make it harder for the player characters the attacks on the power plants are in the winter.